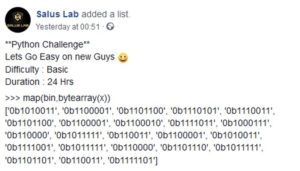 We’re given a list/array of strings. Each one of those is a binary number (denoted by the 0b prefix).

The author also provided the source code he used. This is what he did in short.. 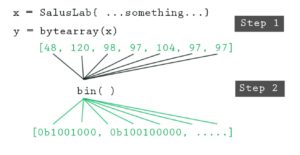 He put the flag as a string into a variable called “x” then did both steps in the picture above.

(Step 1)==> Then he used “x” as an argument to function “bytearray” which takes each character from “x” and converts it into a decimal number representing the unicode value of that character.

(Step 2)==> He used the function “bin” which converts a decimal to its binary equivalent. But how to use that function on each element in the list created from step1? You have 2 options; either use a For-loop, or use the “map” function. The author used the latter.

So the end result is that we have a list containing binary numbers.

To get the flag, we have to reverse what the author did. Here is our plan:

Here is my script to do it: Github link. Run it in python 3, and you get the flag:

Since the author created the challenge using a one-liner, lets solve it with a one-liner.

Link to my one-line solution on Github

Squnity (an arab infosec community) organized a CTF on the 10th of January 2019. It had really interesting challenges. And although I wasn’t able to participate, I downloaded the binaries and took screenshots of the Read more…

Challenge info: (link to facebook post) This is a multistep challenge.. Step 1 Lets visit that link. We find a simple web page with a form Lets type anything and submit.. (I typed 0xbahaa) It Read more…